Harry WA0CNS and Herbert AF4JF went to Potosi, MO in EM47 and De Soto, MO in EM48 to make some contest QSOs as Rovers on Saturday June 11th. Worked several stations on the usual bands CW/SSB, nothing unusual. The location on one of the highest hills in Missouri is good, definitely worth returning there.

Herbert moved to De Soto in EM48rd to make some contacts with Harry later in the afternoon. We have both returned home for the night and went to the Egyptian Hamfest in Granite City, IL on Sunday. Made several more contest QSOs from the Hamfest parking lot in EM48wr. Herbert fried his power inverter (that makes 110V AC from 12V DC, needed to run the 40W PA for 23cm) and finished in the early afternoon, Harry went to Edwardsville in EM58 to activate another grid.
Everything considered, a successful weekend. Little too hot outdoors. We will try to do even better next time.
Posted by Herbert ULLMANN at 9:29 AM No comments:

We have attended the Central States VHF Society sponsored Spring SPRINT contests 2022. Missed the 144MHz part this year, but managed to attend the 222MHz contest on April 19 and 432MHz section on April 27. There was very little to no activity in the Saint Louis area this year. Following pictures are from the 432MHz contest on April 27th:


We are looking forward for the microwave part of the SPRINT contest that takes place on Saturday May 7th!
Note that CSVHF will hold the annual conference on July 22-23 in La Crosse, WI.

Posted by Herbert ULLMANN at 5:54 AM No comments:

Several HAMs from wide area between Fort Wayne, Chicago, Saint Louis and Huntsville became active during the MAD (Microwave Activity Day) on Saturday March 5. The main idea behind this activity was to make some QSOs on the 3456MHz band before recent FCC changes force us to move down in frequency to 3400MHz. Some of us combined this with activity on 10GHz and even other VHF+ bands.
The SLAMS group also participated - Harry WA0CNS went to High Ridge EM48rl, Herbert AF4JF went South to EM47ow and Zack W9SZ was in EN50ue. The guys we tried to work were K9PW, K9JK, W8BYA, KV4PC and others. Unfortunately, the weather was warm but very windy. Way too windy. It complicated setting up the antennas big time. My (AF4JF) tripod with 10GHz dish got kicked over by wind gusts twice. I ended up holding it with one hand for 2+ hours. No way to set up my other bands (1296, 2304 and 3456MHz) that we wanted to play with.
The EM47 location near Potosi, MO is on a hilltop (a windy hilltop), wide open to nearly all directions, with a big parking lot on the top of the hill. I have had to move around that parking lot between attempts on QSOs to get unobstructed view in the desired direction, but generally that location turned out to be very good. Even better, it is about 100km South from St. Louis, which makes it very interesting for QSOs with the guys in the "4" land.
I have tried 10GHz with several stations mentioned above, but only succeeded with Gedas W8BYA - we managed to make a RS contact over 577km between AF4JF in EM47 and W8BYA in EN70. Funny was that we achieved that through "backscatter" on a rain cell over Cedar Rapids, Iowa! That cell was nowhere close to the direct line between us ... a nice proof that EVERYTHING is possible on the 10GHz band!
Several pictures attached.

Posted by Herbert ULLMANN at 11:04 AM No comments:

Herbert AF4JF, Ron KO0Z and Harry WA0CNS took a trip to the highest mountain in Missouri, Taum Sauk 1772ft (540m) South of Saint Louis. Herbert's dog Darcey came along to make sure everything was done safely. The main idea behind this trip was looking for suitable microwave locations in the EM47 grid. We didn't do this alone, several guys living South of Missouri were waiting for us on other hilltops, ready for QSO on 1296MHz and 10GHz (KV4PC, K4QF, KD4APP, AB4DX, NV4B, W4RXR, KD4GRD, AG4V and WG8S).
Our first stop was the Taum Sauk mountain top (the national park) itself. We have been there before, so this was easy. As expected, found a nice viewing platform open towards Saint Louis and little East of it: 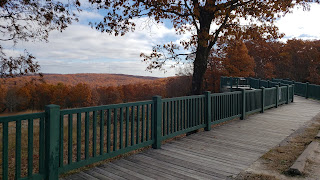 We should be able to work Zack W9SZ or Gedas W8BYA from this location on 10GHz too, but some propagation enhancement will be needed for that.
However, we didn't find any location open towards South to try with our friends from the "4" land. Next stop was the MDC fire tower just outside of the national park: 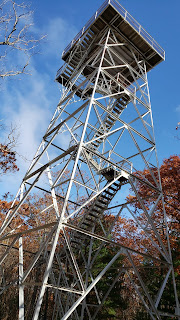 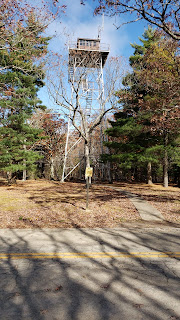 Unfortunately, the upper platform was locked by a solid lock. It was very windy up there, so we gave up the idea of setting up on the stairway and continued to our next destination, the Taum Sauk water power plant. We have seen several pictures of the upper reservoir others published on the Internet just weeks ago, so we didn't expect any problem there. We were wrong ...

The lower reservoir is easily accessible, but the upper one is not. All the street signs that pointed us to the "Ameren Upper Reservoir" got us just to a visitor center. Looks like visitors can register for a guided tour, but not drive anywhere up the hill and play radio ... The guy working at the visitor center suggested a back road across the nearest hill to try - we were still trying to find a spot open towards South and the guys waiting for us. Unfortunately, we didn't find any open spots. Just hills and trees and bushes and more hills and ... you got the idea.
We tried to explore some of the hills around (they were all called "mountain" for some reason), but no luck. Other local guy whom we stopped told us that there are some open spots on their tops, but these are only accessible through hiking trails, not by a car. After another hour of trying and trying, we gave up, called the waiting guys on a phone and decided to find something to eat.
Finally something worked! We have found a Mexican restaurant with good food. Ate that and got started on our way back towards Saint Louis. Big surprise just minutes from the restaurant - we found a good open microwave location, still in EM47! There are two nearby parking lots that offer nearly full 360 degrees open view. Attached pictures show the direction towards Southeast: 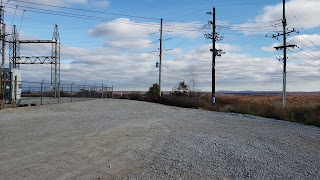 This location isn't the highest and is little bit closer to Saint Louis, but the distance is still almost 100km. Besides, it is in EM47 which is different grid (St. Louis area is in EM48). We definitely will come back to this location next time and try again.
So, the trip wasn't a total failure after all, despite the fact that we didn't even set up any station today. Herbert's microwave equipment just made a round trip in the back of the car. We returned back home before 5:00pm, about 10 hours after leaving this morning. Big thanks to all the guys waiting for us in the "4" land!
Posted by Herbert ULLMANN at 9:01 PM 1 comment:

We have held our 4th annual lunch at Chandler Hill today. The Winery was open for business, both indoor and outdoor seating with live music. Several pictures attached. Unfortunately, we still fell the COVID restrictions. Only 4 of us met at the winery today: Ron KO0Z, Debbie KC9ULA, Harry WA0CNS and Herbert AF4JF. Plus my usual companion, K9 microwave enthusiast Darcey. Note that the winery is "dog friendly", dogs are welcome even indoors.

We ate our lunch while discussion the usual things, from weather to Rain Scatter propagation, Herbert's new 76cm dish antenna etc. Nice event that certainly will be repeated next year!

Posted by Herbert ULLMANN at 2:02 PM No comments:

ARRL September VHF and ARRL 10GHz And Up Part 2 Contests

Harry WA0CNS and Herbert AF4JF participated in the ARRL September VHF Contest as Rovers activating EM48 and EM49 grids. We didn't go far from Saint Louis area, just Winfield and Lakeside 370 Park. We have worked each other on bands between 144 and 5760 MHz plus 122 GHz, but didn't bring out 10 or 24 GHz this time. Several pictures attached: 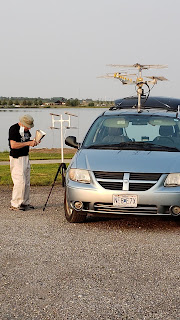 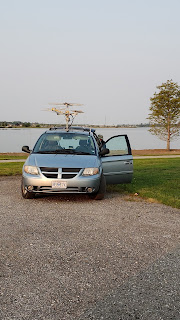 Harry WA0CNS setting up across the lake from Herbert

Recording of a QSO on SDR Pluto

There was the second leg of the ARRL 10GHz And Up contest. Herbert AF4JF went to Hannibal, MO while Harry WA0CNS set up at the High Ridge, southwest of St. Louis. Herbert tried to work some stations in the North from Lover's Leap above Hannibal, then turned back and made several stops to work Harry. Looks like there are several good spots near Hannibal to work stations from St. Louis area!

This is how loud the WB9PNU/B beacon is at Bowling Green, over 80km away

Everything considered, both contests were fun. Just little too hot. It would be nice to have more stations to share this with.
Posted by Herbert ULLMANN at 11:49 AM No comments:

Saturday, 28 August, 5:45 AM, the temperature is already in the 70s and the heat warning continues.  Undaunted, Herbert AF4JF and Ron KO0Z make the trek up Missouri Route 79 to Louisana, MO to activate EM49lk for Gedas W8BYA in Ossian, IN EN70jt on 10 GHz.  The 321 mile (517km) path would not be an easy tropo path.  We calculated our best chances would be in the morning.  By 7:00 AM, we were QRV overlooking the Mississippi River.

For about an hour Herbert and Gedas tried to work each other to no avail.  They even tried aircraft scatter.  AF4JF actually heard W8BYA's 10 GHz signal briefly.  But not long enough to make a two-way QSO.  As luck would have it.  Two rain cells popped up west of Chicago and north of Peoria.  They were able to work each other via each rain cell!

From our location in Louisana there was not a cloud in the sky.  We couldn't even see the storm clouds north of us!  Fortunately, the storms were over 30K in height allowing us to complete the two-way 10 GHz Q.

Congratulations to both Herbert and Gedas.  W8BYA now has grid square EM49 confirmed in his impressively growing list of 10 GHz grid totals! 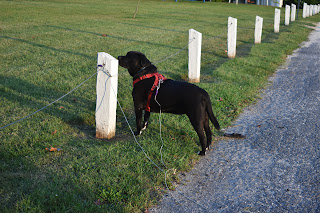 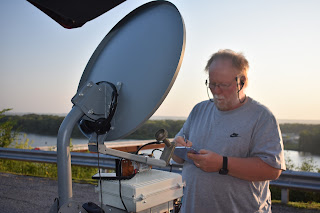 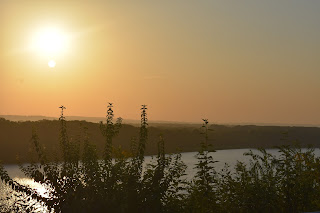 Sun rising over the Mississippi River 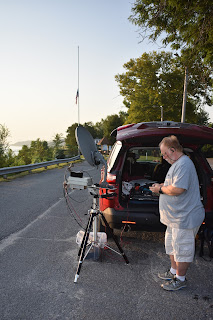 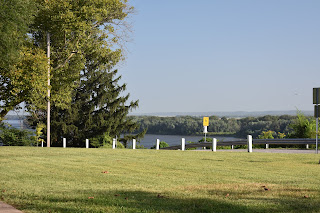 Not a cloud in the sky, but to the north was a rain cell allowing AF4JF and W8BYA to confirm EM49lk and EN70jt.

Note the rain storm west of Chicago.  The blue dot is our location in Louisana, MO EM49lk and Gedas W8BYA is near Ft. Wayne, IN. EN70jt. The 10 GHz Q was made using rain scatter with that storm.